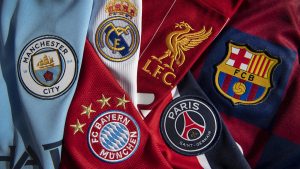 In an unprecedented moment for European football, 12 top clubs from across the continent – including the Premier League’s big six – have announced the formation of a new midweek competition to rival UEFA’s Champions League.

Three more clubs are expected to join The Super League, which will start ‘as soon as practicable’.

The announcement and earlier revelations about the potential proposals have sent shockwaves through the football world and been met with profound outrage on social media, with many pointing to the greed of football clubs in the modern era to the detriment of fans.

Nothing about The Super League was safe from serious scrutiny, will some tweeters pointing out that the competition’s logo is a bit…naff.

An official statement even had the audacity to go into the financial benefits of the newly-founded competition, saying the Super League ‘will provide significantly greater economic growth and support for European football via a long-term commitment to uncapped solidarity payments which will grow in line with league revenues’.

The new league would comprise 20 teams: 15 founding members who cannot be relegated, and five teams who qualify annually. It wouldn’t replace the Premier League or other domestic competitions, however – it would run alongside, similarly to how the Champions League currently works.

A statement revealed the competition would start in August, with clubs participating in two groups of ten, playing home and away fixtures, with the top three in each group automatically qualifying for the quarter finals.

Teams finishing fourth and fifth will then compete in a two-legged play-off for the remaining quarter-final positions. A two-leg knockout format will be used to reach the final at the end of May, which will be staged as a single fixture at a neutral venue.