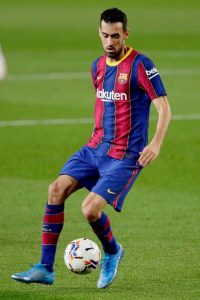 Two goals from Lionel Messi helped Barcelona survive a brief scare to ease past Getafe on Thursday night and keep pace with the leaders in La Liga.

A beautiful goal from Messi, converting Sergio Busquets’ awesome pass, put Barça ahead but they were soon pegged back when Marc Cucurella’s cross cannoned off Clement Lenglet into his own net.

Sofian Chakla scored the next comedy own goal, passing the ball back to goalkeeper David Soria who had come charging out of his net unnecessarily – think Kieran Trippier and Hugo Lloris against Chelsea in 2019.

A hectic first half got worse for the visitors when Messi got his second, converting from the acutest of angles having originally been denied by the post.

Ronald Araujo gifted Getafe a route back into the game by catching Enes Unal in the box. The striker converted the penalty to bring the score back to 3-2, but Araujo atoned for his error with a glancing header from Messi’s corner to reestablish his side’s two-goal lead. The win was rounded off by Antoine Griezmann, who was fouled and scored the resulting penalty in injury time.

The win lifts Barcelona back above Sevilla into third in the La Liga title race, five points behind leaders Atletico Madrid with a game in hand.

So. Player ratings. Shall we?

Marc-Andre ter Stegen (GK) – 5/10 – Had no saves to make and couldn’t do anything about either goal, being wrongfooted for the own goal and sent the wrong way for the penalty.

Oscar Mingueza (CB) – 6/10 – Isn’t part of the most secure Barça backline right now, even though it’s a lot better than it was at the start of the season, but got some harsh treatment when he was subbed off by manager Ronald Koeman. Didn’t make the mistakes for the goals but incurred the Dutchman’s wrath and was brought off for Samuel Umtiti. Harsh.

Gerard Pique (CB) – 7/10 – Won five aerials during his 45-minute cameo. Was the cool head needed at the back before being substituted.

Clement Lenglet (CB) – 4/10 – Endured a horrible opening period, getting booked before scoring an own goal. Failed to improve and was brought off at half time.

Sergi Roberto (RWB) – 5/10 – Reverted between playing on the right of a midfield three and wide on the wing. Pretty quiet before being brought off at half time.

Jordi Alba (LWB) – 6 /10 – Not one of the Spaniard’s must productive outings but Alba linked up well with Messi at times and was always available in advanced areas on the left.

Frenkie de Jong (CM) – 7/10 – As smooth and efficient as ever. Dropped into the back three when changes were made in defence.

Sergio Busquets (CM) – 8/10 – Provided a brilliant side-pass to send Messi through on goal for the game’s opener. Is enjoying a nice renaissance and this was another tidy performance.

Pedri (CM) – 5/10 – Just looked absolutely knackered throughout. Could have done with a rest and a lot of his play seemed to suffer as a result of his fatigue.

Antoine Griezmann (ST) – 7/10 – Really busy on the ball, completing five dribbles. Pressed well from the front too, making a couple of tackles. Didn’t get any shots away but linked play nicely. Tucked away his late penalty nicely.

Lionel Messi (ST) – 9/10 – A trademark performance from the diminutive forward, scoring two pearlers in the first half, also striking the woodwork. Picked up the assist for Araujo’s header. His brace also took him to 25 league goals for each of the last 12 seasons. Bit crazy, that.

Ronald Araujo – 6/10 – A bad challenge from Araujo gifted Getafe a path back into the game. Was booked for the foul but made up for it late on with his side’s fourth goal.