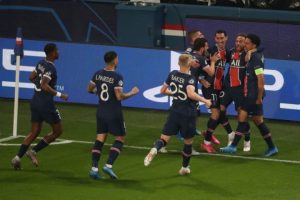 If Pep Guardiola was unsure of the task facing his Manchester City side prior to their Champions League semi-final clash with Paris Saint-Germain, he knew exactly what he’d got himself in for by the 15-minute mark of the first leg.

The French champions were absolutely electric for the first quarter of an hour, with Neymar in particular running the City defence and midfield ragged as he showcased his extensive repertoire of flicks and tricks.

Needless to say he was offered some ‘rough’ treatment from the City backline as they looked to curtail his fun, but it’s no use focusing all your efforts on Neymar when Kylian Mbappe and Angel Di Maria are pulling the strings the second your back is turned.

Guardiola will no doubt have been furious at the manner in which City conceded the opening goal of the game, as Ilkay Gundogan completely ignored his defensive duties in allowing Marquinhos a free run in the box before glancing Di Maria’s header home.

With little over 15 minutes on the clock it was already beginning to look like a damage limitations exercise for the visitors, and in all honesty if you’d offered Guardiola a 1-0 away defeat at that point he’d probably have snapped your hand off.

While City managed to create a couple of chances of their own in the opening 45 minutes, the two sides headed for the interval with only one outcome looking likely, and as Neymar emerged for the second half with a cheeky grin on his face you feared the worst for the visitors.

Well, so we thought anyway.

Guardiola’s side emerged for the second half looking like a totally different team and – aside from the occasional burst of pace from Mbappe – the architects of City’s downfall in the first half were nowhere to be seen.

Instead, City continued to surge forward creating wave after wave of pressure. While PSG may have more world-class individuals capable of moments of brilliance, City proved to be the world-class team of the two and they were ultimately rewarded.

Firsty, Kevin De Bruyne’s inswinging cross completely deceived the PSG back line and Keylor Navas before sailing into the top corner, before Riyad Mahrez’s free kick inexplicably slipped through the home side’s wall and into the back of the net.

One of the main reasons behind City’s second-half dominance was that they finally managed to get a foothold on the ball, and midfield lynchpin Rodri was key to their efforts.

The former Atletico Madrid man has come in for some criticism since his move to the Premier League, though he was exceptional in the Parc des Princes and his ability to keep hold of the ball and prevent PSG from mounting continuous waves of pressure was vital to City’s second-half display,

Who would’ve thought that not letting Neymar have the ball was the key to stopping him playing?

The Brazilian barely had a kick in the second 45, and his waning influence on the game caused a domino effect as the likes of Mbappe and Di Maria also struggled to impact proceedings. Again, who would’ve thought that stopping a team’s best player was the way to stopping them playing well?

Obviously there’s a lot more goes into it than us just sitting here saying ‘well stop Neymar playing then’, but the fact of the matter is City’s team game prevailed over PSG’s individuals.

Guardiola’s men were up against it in the French capital, but they showed they had the stomach for the fight and came out swinging, whereas PSG just didn’t fancy the battle, and that attitude looks like costing them their dream of European success.